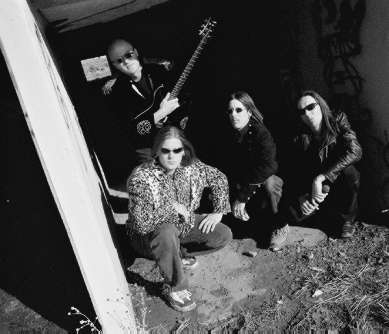 The Taos News
By Melody Romancito

The name is a metaphor for fertility, fruitfulness and crosspollination. The pistil is the female part of the flower that incubates the growing seeds after being fertilized by the pollen from the stamen, the male part. the fact that the pistil is sticky means the flower is definately interested in making that fertilization process happen - which is a metaphor for what a local band is trying to accomplish on many different levels.

Part of the band's stage dress includes insectoid-style sunglasses, which keeps the metaphor going. Like the birds and the bees, these musicians pollinate the hip hop scene in Taos. To keep the strain healthy and genetically interesting, the band has carried pollen from a wide variety of musical styles. The result is a striking hybrid.

The group delivers a crop of tunes that has music classifiers and catagorizers scratching their heads. The music has much in common with the new layered funk and trip hop (a psychedelic offshoot of hip hop). Sticky Pistil's sound is like The Lo-Fidelity Allstars with Pigeonhead on a cyber date with Frank Zappa and Captain Beefheart. Their new release, "Hi-Fi superfly", has as much in common with urban R&B and rap as it does with the psycedeleic funk of the early 70's.

The energy of each band member is infectious. Each member seems to be happy to find himself in a band like this. Mark "uziq" Hershiser, Scott "the preacher" Kesson, Mike "mc2" Caron and Shawn "freakboy" Perry.

Band leader, master mixer and lead "singer" Hershiser said this blending of styles allows the band to pay tribute to all their musical heroes at once.

"My influences include (David) Bowie, Iggy Pop, Tom Waits, the New York Dolls, the Psychedelic Furs, [Beck] and Public Enemy. Now there's a cross-section of American pop music," he said, laughing. Growing up in Southern California, he added, made for a very urban overlay in his musical taste. Hershiser is tall, wiry and has a sly sense of humor.

Kesson, sings sings and plays lead guitar, said, "my tastes run from fusion to guitar legends. From [drummer] Bill Cobham to [guitarist] Robert Fripp. From Alfonse Musant to Jimi Hendrix. I'm also a big Zappa freak. I wore those albums through, while I was growing up in Denver," he said. "I once saw [Parliment] Funkadelic in concert. It was alife changing experience,' he added. Kesson's laugh is deep, infectious and plentiful.

Caron, the drummer for the band, grew up in the Midwest and his influences reflect that. "I listened to progressive rock like Peter Gabriel and King Crimson. Also liked classic rock stuff like Jeff Beck, Yes and Rush." Caron is quiet, the quintessential drummer who expresses himself with his drums.

Perry grew up in Southern California, too. "I listened to a lot of thrash metal and punk and rap, like Run DMC and 2 Live Crew. Then there's Madonna and Duran Duran," he added. Perry is the youngest member of the band and is also described by his fellow members as the "workhorse" of the band.

Before joining Sticky Pistil, Perry played bass for one of Robert Mirabal's national tours. He also played in the Never Never Band, which was one of the precursors to Sticky Pistil.

"Our music, which uses a lot of electronic tools, does not have the 'Taos vibe,' that mystic Taos ganja mojo," Kesson explained "Hip hop is the new culture. It's the new generation and it is an important one. It's a pallette you can paint with.

"People think performing to samples and drum machines is easy, but when things get out of sync, it's the ultimate Sticky Pistil train-wreck," Hershiser explained. "Our stage persona is kind of freaky. I've dressed in drag, done a little gender-blending. I do it for the shock value......I make this screaming psychedelic presence," he said.

"We certainly like to take you out of the ordinary with the weird appearance," Kesson added.

Besides releasing a [Independently] recorded and distributed disc, Sticky Pistil is creating a big online presence. Their release is listed on MP3.com, a controversial website dedicated to the proliferation of pop music.

MP3 is a file format which stores audio files on a computer in such a way that the file size is relatively small, but the replicated song is faithful to the original. Typically one megabyte of space is equal to one minute of music or several minutes for spoken word and audio books.

MP3 poses several problems regarding copyrights. Using MP3 files is legal if the song's copyright holder has granted permission to dowload and play the song. It is, however, a new way to distribute and promote new music.

Singles from "Hi-Fi Superfly" are also listed in the top five singles in the funk category for a new digital music dowload site, AMP3.com. One thing that separates this site from others is that artists are paid each time someone dowloads the artist's music.

The band has also set up an impressive site of their own, stickypistil.com, which includes music and animation for web surfers. Hershiser has big plans for establishing a live-feed music website for the Taos scene. "The company we have set up, Vinyl Grooves, hopefully, will turn into an internet-based independent label. I'm thinking about putting together a compilation of local grooves and rappers," he said.

Hershiser has also helped a couple of young rappers from Taos High School. The rappers, Joe "G-Styles" Moya and Hillario Ledoux, with the help of Hershiser, have put together a CD of samples and rhythms.

"I'd like to put together a complation of all the young rappers here in Taos. They tell me about all the craziness at school. The situation is not good. There's so much peer pressure to get into some weird things. Rapping is creative and something to do besides getting into serious trouble," Hershiser said.

Rapping may be creative and part of a new important generation, but some people may have difficulty embracing music that prizes rhythm over melodic strings. The sounds of Sticky Pistil are going to challenge more than the patience of parents and our concept of how music is distributed.

They may have so much infectious, positive energy you can't help but be in love with their ideas and enthusiasm, even if you can't embrace the music.

back to the top

back to the News

back to the Reviews